Patience are required with a steady hand to achieve a great look. Easy to follow instructions. I have put together around 6 light kits and I will say this one is my least favorite. While other sets are super elevated by the light kits this one isn’t quite brought to life. Reguardless I think it is worth it as it was also one of the least expensive kits I’ve gotten. This light kit really pops. It’s simple but the colors all are unique and bright. Love how it looks on display! I like how the lights look when on. Instructions were somewhat hard to follow. Ended up with lots of extra wire that I will need to go back and hide. As other reviews stated the wires are very fragile. I put it together with the lights on so I could see when I was applying too much stress. The end result is incredible. I was very impressed how all the wires come together at the end. Highly recommend. The lights look fantastic. One of the easiest to assemble! Great Christmas reef specially with the light set up. got it for Christmas 2021 great The lights & Wires are of Good Quality.
The Lights Bring the At-At to Life.
Excellent Kit. It is nice but for two things. I wish the Tree lights had not been wired with a Bldg to allow more flexibility in placement of the tree in my display. Second I wish the lights for the trolley had been had beendesigned to leave the trolley mobile. Otherwise nice set.

Nice and intuitive solution. But the LED lights for the chains in front of the house are sitting too high in the black bricks in which they are placed. Hence it is not possible to place the yellow bricks on the lightchain. The light are very cool and bright, a lot harder to install then expected. Wish they had a insulation guide for as you build. Not sure we will attempt this again. We are doing the Home Alone house

Hello, we're sorry to hear that. But there is an installation video on YouTube, here is the link to it: https://youtu.be/VbJl_i85oio We hope it will help you.

As I enlight all of my LEGOs, again it was a great joy to do this one. A real stunning gimmick are the switches in the loading bay, one switch offs the engines and the other switch ons the bay light. Both is so obviously :). This is a Christmas gift but I’m sure it will be well received and look great! Really nice set of lights in a darker area. Installation was not too bad frustrated by the actual Lego build rather than the lights. Lost 1 star because of the sheer amount of wire included and the tangle it became trying to hide it meaning the set doesn't look as good during the day. Genius idea to be able to light up Lego pieces and bring the alive. Great product and great videos online to watch step by step fitting the lights and can hardly see the wires. I love it. Easy to install and perfect brightness of the light

This is the first time I’ve ever put lights in my lego builds, & it was totally awesome !!! I had my older brother Richard help me install the lights (he’s 63 & I’m 52) & we both had the times of life (it was like we were little kids again) !!! I’ve been building legos since I was 9 yrs. old but I had stopped for a long time because I moved around a lot, but 4 yrs ago I moved to Monroe, WA & to my surprise in the local mini mall opened a lego store called “Bricks & Minifigs”. My love for Star Wars & legos was brought back to life !!! They had every ship & vehicle in the Star Wars universe, & I now have every ship & vehicle in lego form. I’ve spent well over $1000 in S.W. legos & my brother & I can’t wait to put lights from you in all of them !!! So thank you for coming up w/ the ideas for putting LED lights in legos, it’s the coolest thing I’ve ever done & the coolest thing I think I’ll ever do !!! 😂😁👍🏻
Thank You, John Ferrara 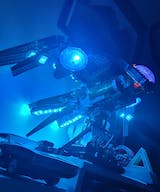